As part of the Performance and Games Network we organized a two day workshop here in the Mixed Reality Lab last week Monday and Tuesday (27th and 28th of October). We had a very nice and diverse crowd of a little bit over 30 people – the majority from the UK but also participants from the Copenhagen Game Collective, old colleagues from Fraunhofer FIT in Germany and also a mixed group of Australians from Brisbane.

Matt Adams from @blasttheory showing the very first implementation of Can You See Me Now? #perfgames pic.twitter.com/FjpvaDo3ey

After lunch we split into six groups, and I then high-jacked the workshop and had everyone use my newest set of ideation cards to come up with an idea for a mixed reality game. 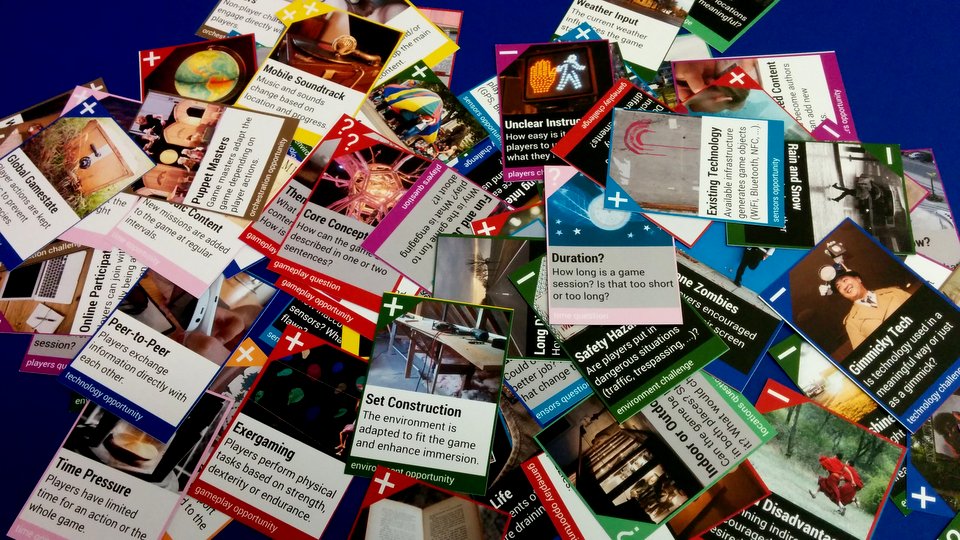 During the brainstorming I was constantly running around between the different groups to see how they were doing and to sometimes give them further instructions. People really liked using the cards, but for me it was a very chaotic experience trying to be aware of the progress of all six groups. At least I got some good exercise out of the whole thing as the groups were divided between two floors!

At the end of the first day all groups had more or less concrete ideas about what they wanted to implement on the second day. While the groups were prototyping their designs I used Tuesday to interview the participants and ask them more questions about their experience with the cards. At the end of the day I even had time to create a first version of Stick or Snake, an entertainment-safety app, which we came up with during our recent trip to Australia (more on that in a later post).

Here are some of the games that were developed:

Project C
One person stuck in a coffin wearing Oculus Rift calling out for help to random strangers walking in a nearby park.

Virtually burying the workshop organizer in an Oculus coffin at #perfgames pic.twitter.com/wMdz4omLt7

Grand Push Auto
An exergame where you stop your car and you (or someone else) has to push it up to a certain speed.

You should really check out the video to appreciate it!

Other games included: taking on the role of a biomechanically enhanced dog trying to find his friends while avoiding radiation emitted by technology; telling and transporting stories around the city and the world; secretly stealing someone’s phone and returning it eventually.

In general the workshop was great fun for everyone involved – I think researchers and practitioners should more often come together for game jams like this. Concerning progression towards my Phd the workshop was also very valuable. Mainly I will analyze the workshop in regards to further clues on how the ideation process can be supported, either with technology or without.
For now, main themes arising seem to be:
1) How to prevent and overcome “logjams”?
2) How to keep a rhythm and when to progress into a new phase?
3) How to support recording and remembering of ideas and thought processes?

3 thoughts on “Performance and Games Workshop”