Mixed reality games combine digital technology with the physical world in a meaningful way. They allow us to explore our surroundings in a new and exciting way and create powerful experiences that go beyond “traditional” screen-based video games. Other names for these games are pervasive games, location-based games, augmented reality games, or urban games.

These games offers an amazing range of opportunities for design, but they also come with their own unique challenges.

What kind of technologies should you choose?
How to incorporate locations in the game?

This is where the Mixed Reality Game Cards come in!

A deck of 93 cards supports you in designing these games, no matter if you are an expert or have no previous experience!

The Mixed Reality Game cards let you explore the design space in a playful way and help you create, expand, and refine exciting new ideas – your ideas.

And you can order your own deck now!
Or give it a try on Tabletopia!

The Mixed Reality Game Cards are a deck of 93 beautifully designed ideation cards and cover a wide range of design opportunities and challenges of mixed reality games. The cards are based on several years of rigorous academic research at the Mixed Reality Lab of the University of Nottingham. They encapsulate design knowledge derived from designing, developing and staging mixed reality games and distill best practice of dozens of mixed reality games and experiences from industry, artists, and academia alike. The cards were refined over the course of several workshops with a total of over 250 participants. They support multidisciplinary groups of varying backgrounds and levels of experience. In fact, they might even better the more diverse the team is!

The Mixed Reality Game Cards can be used in two ways:

The deck consists of a 3 different types of cards to achieve these goals:

In addition each deck also comes with a set of blank cards that allow you to extend the range of the cards even more to your liking!

For Educators and Professionals

Ideation cards are a great tool for brainstorming and developing ideas in small groups, and the Mixed Reality Game Cards are no exception. They are a playful way to explore the design space of mixed reality games. The cards were developed over the course of several workshops, and have been intensively used since then. Professional developers, academics, artists, students, charity members, children, … whoever used the cards praised them for being hugely inspiring and very enjoyable to use. The cards work as well for experts as inexperienced users.

No matter whether you are an expert in the field of mixed reality games, or want to take your first steps in this exciting new field – the Mixed Reality Game Cards will support you in these endeavours. They work great in small groups of 2-5 participants, or even alone, no matter your previous experience.

If you are a professional developer of mixed reality games you can use the cards to introduce your clients to the rich possibilities and find out what really excites them. Or just use them with your team to get some new ideas to explore further. The cards were used to design Detect, a mixed reality game taking place at Format 15, UK’s biggest photography festival, organized by QUAD Derby. Another game that was originally conceived with the cards is Taphobos, an immersive coffin experience that has since travelled to international festivals and conventions in London, Berlin, New Yorks, Brisbane, and others.

If you are a lecturer you can use the cards to educate your students about the design space of mixed reality games. The cards make it easy to gain an understanding of not only the core concepts of these games, but will also give them a thorough overview of the design challenges that await them. The cards have been used successfully in computer science as well as art programmes, for example at the University of Nottingham, University of Lincoln, De Montfort University Leicester, and TU Graz. 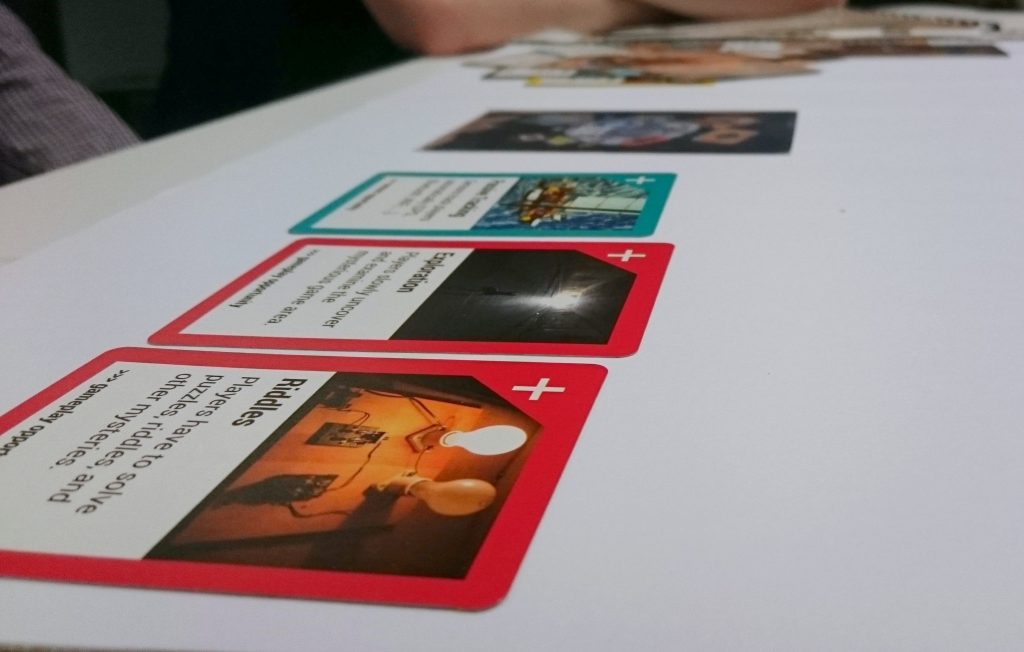 “The cards were a fantastic way to explore the game mechanics and investigate the issues and points to be wary of. What was also great about using the cards is that it felt like you were playing a game to design a game.”
– Curator at a gallery

“I like the use of cards because it gives you a good amount of ideas, with a big range of issues and challenges we didn’t even think about. Also the cards were very good at reminding us on what the main ideas were and being able to select cards that focused on our idea made us tidy up our idea very early on.”
– Student of Games Computing

“I really enjoyed having the cards. And the positives are that it helped me visualize and keep track of the ideas. Cause we can attribute those ideas to a card, and group them, and rearrange, and so on. So it is nice to sort of have a kinetic way of organizing ideas that isn’t just writing down notes on post-its. You know, something visual.”
– Technologist

“I think the combination of cards were excellent. The cards were just so off the wall, you didn’t know what was gonna come. So rather than all sitting round going ‘Ooooh, don’t know where to start’, they got us talking.”
– Member of a British charity with no previous knowledge of mixed reality games

“I see a lot of young artist coming out wanting to make their first mixed reality game. Or their first phone app. And they are not getting that much further than we did when we first started. People should be allowed to get a bit further now, because the technology is better. People know these things. I think it is really good as a tool. I kind of got bored of saying, ‘Oh, you should think about this, and the orchestration…’ That kind of stuff. It gets boring to have to kind of worry about that.”
– Artists who has been developing mixed reality games for over a decade

51 Opportunity Cards are illustrating the rich design space of location-based experiences and are derived from best practice examples of existing games and experiences. Together, these describe the different elements of a design and are used as the “building blocks”.

18 Question Cards take a high-level approach to the design. They help reflect on a design idea by forcing you to define the boundaries and constraints of it.

24 Challenge Cards are a collection of common pitfalls. These are issues that appear regularly within location-based experiences. You will have to consider whether these might apply to your design and how to overcome them.

One of the two ways the Mixed Reality Game Cards can be used is for rapid generation of ideas for new mixed reality games.

In “easy” mode every participant draws 3 cards. The first player then plays one of them and explains how the card creates a game. The second player then adds another card to it and describes how it extends the existing game idea. This continues until everybody has played a card.

In “hard” mode players cannot choose which cards to play. Instead they just randomly reveal 3 cards, and then they have 3 minutes to create a game idea that incorporates all cards. This method is more challenging, but the randomness also creates more interesting ideas because it often forces you to think outside-the-box when an odd combination comes up.

What also works really well is to add a card from the board game Dixit (or one of its expansions; I really like the Odyssey one because it features a lot of interesting locations) into the mix. The cards are really weird and surreal, and are great for inspiration and to give games an interesting theme from the get-go.

After the group decides on a final idea (no matter the method) they should write it down to remember it later. Ideas should be kept short (only 2-3 sentences long), and can be as weird and fantastic as possible. Overall, there are no “wrong” ideas. The process is then repeated several times, so the group will end up with a variety of ideas, some exciting, some odd, some obscure, and some unusable. The point is to create a lot of different ideas.

Can you turn the following cards into a game?

After you have generated an idea with the cards (or perhaps you already had an idea before), it is time to use the Mixed Reality Game Cards to explore the idea in more detail. This is where the the Question and Challenge Cards come in. However, first you should use the Opportunity Cards to build a fully fledged idea. It works best if all group members draw a couple of cards, and then play a card if they think it meaningfully enhances the idea. After a while the idea should become richer and more defined. At this point it is useful to switch over to the Question Cards.
This is the first step in refining the idea further. Instead of adding to it, the Question Cards will surface the important parts of the idea. Similarly, they will also make sure you have taken into account all important elements that a “complete” idea needs.

The next step in the process are the Challenge Cards. These problems and issues “fool proof” the idea and turn it into something more realistic.

Something that works really well as a final activity is to arrange all the cards that were important during the design process in the form of a poster. This nicely visualizes the idea and also is a good way to make sure that everybody who worked on it has the same understanding of the game design. 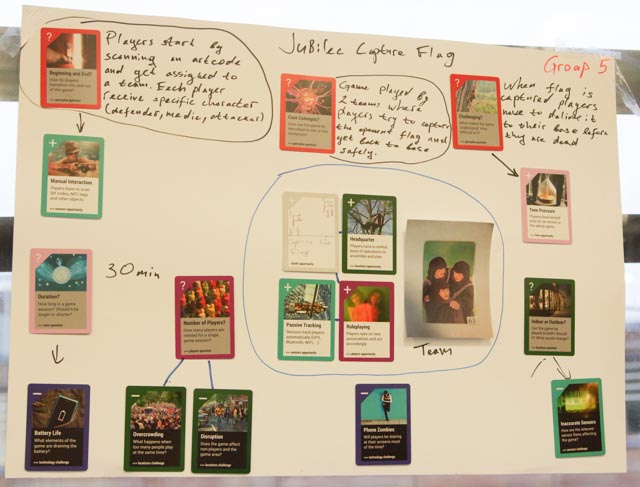 The cards have been developed as part of my PhD at the Mixed Reality Lab, University of Nottingham. The work was in part supported by EPSRC grant EP/I011587/1 as part of the ORCHID research project.

Images on the cards have been used in accordance with Creative Commons. Please have a look at the detailed image credits.

The Mixed Reality Game Cards are available for purchase.

You can play with the whole deck (without Dixit cards) on Tabletopia for free.

Sign up with your email address if you want to be informed about any updates to the cards, special offers, tips and tricks, and more.